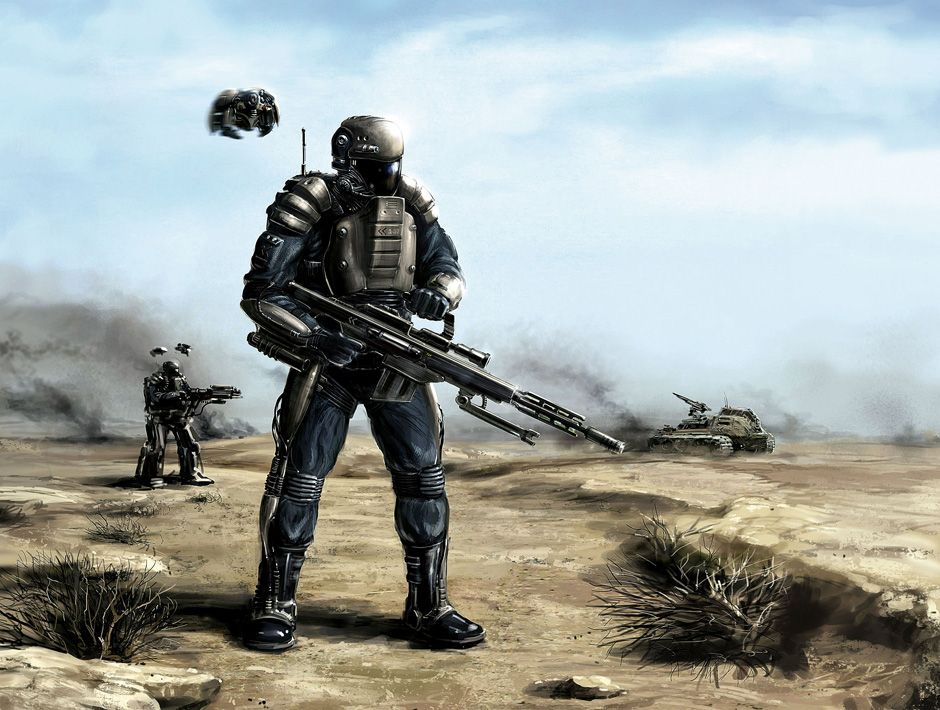 The Kameiras are elite slave-soldiers of the Amarr Empire, drawn from the finest stocks of Minmatar slaves and subjected to an intensive, and often deadly, regimen of training. Scarred in mind and body by years of fighting for the Empire, a veteran Kameira recalls a past conflict while taking part in the ceremonial aftermath of a more recent battle.

Hemah watched as Imperial Major Shayiskhun stooped and trailed his fingers through the cooling remains of the funeral pyre. The Major straightened and solemnly rubbed the ashes he’d collected into a cut on his forearm. The eyes of the assembled Kameiras were bright with emotion and pride as the Amarr officer took part in a ceremony so sacred to them, yet so frowned on by the Imperial command. Shayiskhun had become an officer in the Kameira corps as a Cardinal Lieutenant, and like any Amarr officer new to commanding the Kameiras, he had been appalled by the sight of soldiers in the Imperial Army rubbing the ashes of the fallen into their wounds. Some officers never got over their distaste for the ritual. Most quickly learned to tolerate and even appreciate it as a critical means of maintaining morale and unity in Kameira units.

Major Shayiskhun was that rarity, an officer of the ancient Amarr bloodline who took part in the ceremony itself. In a way, Hemah mused to himself, Shayiskhun did the fallen even more honor than the Kameiras themselves. It was one thing for the Imperial authorities to turn a blind eye to the Minmatar slave troops performing profane funeral rites, but quite another if an Amarr officer took part. Shayiskhun, though, was a hero, and his troops famed throughout the military. The regulars called them “Shayiskhun’s Avengers.” The Kameiras called themselves “Sons of Shayiskhun” and left it at that.

Hemah thought back to the first battle after Shayiskhun had taken command of Hemah’s platoon. It had been a hard one, for them all.

“Second Hemah! Take two men and secure building C32!” Lieutenant Shayiskhun shouted over the deafening roar of the battle, a sound of intermingled vehicle noise, weapons fire, explosions, and the screaming of dropships flying to and fro. In fact, to call it a “sound” would be a pathetic understatement — rather, it was a mailed glove of noise and vibration that crushed the senses in its grip. It was battle. War.

Hemah raised his hand in acknowledgement and signed to Rinah and Omaristos in their unit’s battle language. The three men got up into a running crouch and moved down the street toward building C32, which had once been three stories high but now showed the empty windows of only one floor, the jagged teeth of the upper floors protruding at one corner. Immediately, out of the background noise of the battle, the sound of small arms fire erupted, sharp and deadly close. The ground around them showed impacts as the incoming weapon fire tracked them. Hemah, in the lead, signed quickly and dove for cover in the remains of the adjacent building, flattened to nothing only the day before. Rinah and Omaristos leapt after him into the shelter of a bank of rubble, checking themselves for wounds as soon as they were in cover.

Hemah looked around. The leveled block showed no immediate dangers, and the buildings to the rear were under friendly control. The enemy was somewhere ahead. At least that much was simple. Their objective, C32, seemed quiet, but something told him enemies were present. Waiting. He studied the walls and saw that blast damage had weakened a large section of the side of the building. That would be their entrance. Omaristos carried a force charge launcher, the so-called “bubble gun,” capable of clearing minefields, field obstacles, and much else besides. Hemah signed, and the big warrior, huge even for a Kameira — surely a purebred Brutor —unslung the launcher and crept along the bank of rubble.

Reaching a convenient break, Omaristos raised himself to a kneeling position, shouldered the launcher, and took aim. An instant after the kick of the launcher firing, a shimmering field of force two meters across snapped into existence for a split second, before winking out. Out of a cloud of dust and debris pushed into the air by the force field, a hole appeared in the side of the building. Omaristos immediately leapt up, slinging the launcher and drawing his short combat glaive in one movement as he ran for the opening. Hemah and Rinah had followed him to the firing position at a crouch and were running behind him with weapons at the ready. Hemah had his own glaive in one hand and his ionic pistol in the other; Rinah favored his shotgun with the heavy-studded choke.

Bursting through the settling dust cloud, Hemah was just in time to see Omaristos thrown to the side by a grenade blast. Without stopping to check on his comrade, Hemah charged at the doorway, glaive held low, and gutted the rebel soldier crouching there as the man tried to bring a laser carbine to bear. Kicking the corpse to one side, Hemah backed into the doorjamb and brought out one of his own grenades: a monofilament special. He primed and tossed the grenade back down the corridor before turning back into the entry room and pinging Rinah, who was checking on their big comrade.

Rinah looked up, anger etched on his face, and shook his head, his long braids swinging about his ears. The combat medic chopped out some battle language and turned back to the corpse of their comrade, quickly removing useful items. The monofilament grenade detonated as Hemah absorbed what Rinah had signed. A frag splinter painted with neurotoxin had taken Omaristos in the face. He hadn’t stood a chance. Hemah was lucky to have avoided the blast.

Hemah pinged Rinah again and, crouching low, went through the doorway, knowing the medic would be following. The air was just clearing from the devastation caused by hundreds of monofilament wire pieces scything through the air. Hemah rushed forward with pistol and glaive, leaping over the remains of the rebels at the end of the corridor and into the next room. He spotted movement and fired a 3-shot burst of ionized lithium in its direction, then dove again for cover. Rinah followed and his shotgun roared death over that quarter of the room. Hemah saw that Rinah moved forward, and left cover to parallel him. A wounded rebel had been crawling to a window. The rebel had been clipped by Hemah’s fire, and the back of his head was blasted open by Rinah’s heavy shot load. They checked the next two rooms quickly, but they were empty. Building C32 was secure.

Hemah thought back on that battle and its aftermath as he watched man after man step up to the pyre and take on the ashes of the fallen. After that day’s fighting, the rebels who had followed the Fifty Tyrants threw down their arms in hope of mercy. They received only the mercy of a quick execution for their surrender. The planetary capital had been taken by storm because it was too valuable a resource to destroy. A randomly-selected provincial city was not so fortunate. Its inhabitants were given a day to evacuate before it was bombarded into white-hot slag by Revelation-class dreadnoughts. The Fifty Tyrants, at least those dozen who had not already been killed or committed suicide, were tortured to death in front of the planet’s loyal holders. The Empire always made sure to teach by example in such cases.

Cardinal Lieutenant Shayiskhun had led his men to such good effect that an entire city district had been secured by nightfall. Omaristos had not been the only Kameira to fall that day. Fully a third of Shayiskhun’s platoon had been killed, and the entire corps presence in the city had lost a quarter of its strength. The Tyrants had received a lot of help from someone, perhaps from one of the Empire’s rivals for dominance of the stars.

But they had not prevailed, and the Kameiras honored their fallen as after any battle. Shayiskhun had seen his first ash ceremony after another officer’s unit had returned from a skirmish. This time his own men had fallen, and the Kameiras of his platoon noted with gruff approval a change in the attitude of the young officer that night.

Hemah was brought back to the present with a jolt as the man next to him moved forward to the pyre. Today’s battle had not been like the Battle of the Fifty Tyrants. The Sons of Shayiskhun had been sent to clear out a heretic nest in the depths of the space station they happened to be using as a transit base. It was a matter of convenience rather than needing Kameiras to do the job. But the heretics had been dangerous enough, and a sniper had claimed two of them. One of the fallen was Rinah.

Hemah stepped up to the pyre as the previous man stepped away, and looked down at the ashes a moment, remembering once again. Omaristos had been his friend in Junior Subigo, after they’d gone through the final human endurance program treatments in the crèche. His death had been a hard blow. Rinah here, well, Rinah had got him through Senior Subigo. The man had already become a medical adept by then. Rinah had healed a break in Hemah’s leg that would probably have led to his death during an extended live combat trial out in the wilds of their training planet. This death was another blow.

Hemah stooped as the major had and, cupping his fingers, scooped up the ash and rubbed it into his bare chest. He’d taken no wound today, so he had sliced open a stretch of skin over his breastbone. He took on the ashes of Rinah and of Amilpur, the other fallen Kameira, just as he’d taken on the ashes of Omaristos so long ago. They were with him forever now, his comrades. Their loss was heavy, but the Sons of Shayiskhun would endure and continue to conquer in the Empire’s name.