One Man Too Many (Chronicle) 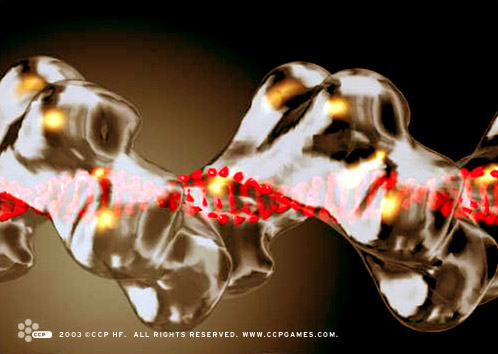 Pier Ancru slowly came to, relishing in the feeling of energy returning to his previously limp body. He flexed a few of his muscles, they felt familiar, yet he knew this was the first time they were under his direct control. Regaining his senses he took in the sterile environment of his surroundings - a small whitewashed, windowless room with the med-table he was lying on the only furniture. A somber looking servant waited on him. The room was located in his quarters on the Pend Insurance station in the Jolia system. Being the chairman and main stockholder of Pend Insurance gave him apartments in all their main stations, not to mention wealth and resources few men enjoyed.

A man in his position had easy access to the newest technology and, as the servant helped him put on a robe, he yet again marveled at this new mind-transfer technology. In the few short weeks since he started using it, it had transformed his life in more ways than he could imagine. No more tedious space travel, no more time wasting on idle journeys through volatile regions. All he had to do was set up clones of himself in places he frequented, hook them into the mind-transfer machine, and he could whiz halfway through the known world in a heartbeat. He could spend the morning in a dour board meeting on Alenia V, the afternoon sun-surfing in Maseera and the evening dining at Giraldi’s on Archavoinet II. ‘Ah, yes. Life is wonderful.’ Ancru mused.

Entering his living quarters, Ancru had just finished dressing when his servant appeared, announcing the arrival of one Jilaine Garat, the Police Commissioner for the station. Ancru had met the middle-aged woman before and knew her to be a committed and capable officer. Ancru put the last touches to his appearance before heading for the anteroom.

“I’m sorry to bother you, sir,” Garat started hesitantly after their formal greetings. “I rushed over here as soon as I heard you had… arrived,” she finished, still a bit unsure about this new travel method that few understood or even knew about. “A grave matter has come up that needs your immediate attention. But first, can you answer me where you came from, sir?”
“From Sizamod system, I spent the night there,” Ancru answered truthfully. “What is this all about?”
“Last night senator Papadour was assassinated in Palmon and it seems… it seems that it was you that killed him.”
“Me?” Ancru laughed incredulously. “That’s impossible! Why do you think that?”
“Well, the assassination took place at a banquet. We have hundreds of witnesses testifying that you were there, with the senator. Can someone confirm you being in Sizamod last evening?”
“No,” Ancru said slowly. He was no stranger to smear-campaigns in business or politics, but this went way beyond anything he had experienced before. “No, I was alone last night. Tell me what happened at the banquet. How was the senator killed?”
“DNA poisoning no doubt. The killer - you - coated his hand in poison that only a right DNA combination could activate. Senator Papadour’s DNA, in this case. It’s a common MO these days. I have here a holoreel from the banquet, if you care to see it.” Ancru nodded his agreement.

The holoreel showed a large, glamorous hall, with at least 300 persons seated in their finest livery eating a lush dinner. The picture zoomed in on one of the tables, where senator Papadour and a man that looked identical to Ancru were seated, amongst others. The people at the table talked and laughed, everything looking perfectly normal. Then suddenly the senator grabbed his throat with both hands, his face turning red, before he collapsed face-forward onto the table, his body raked by a few spasms before becoming totally still and lifeless. Commotion ensued, then Garat switched the holoreel off.

“Did you notice anything out of the ordinary?” Commissioner Garat asked. “That was undoubtedly you, right?” Ancru didn’t answer immediately, he was deep in thought.
“It would seem so,” he finally said. “But there was something… Something not quite right. I just can’t put my finger on it. Can I see the reel again?”

The second viewing didn’t jolt his mind and Ancru saw that Garat was becoming impatient, watching him intently. Then suddenly it dawned on him.

“I’ve got it! The man - me - was eating left-handed. I’m left-handed, but I still eat right-handed.” Garat smiled at Ancru’s words, seemingly pleased.
“That’s correct. Your… file states this little fact and we noticed it. There were other small peculiarities regarding speech pattern, hand movements and facial expressions. Taken together, we can only surmise this was a clone impostor. Very professionally done, but not quite good enough.”
“You knew this was an impostor before you came here?” Ancru asked.
“Of course, but I wanted to gauge your reactions before revealing that fact. If we thought it really had been you my… entry would have been more swift and violent. Now let me ask you, do you have any information about who’s behind this? Any idea who wanted senator Papadour dead and you in deep trouble?”

Ancru sat down, rubbing his templates, thinking hard. He and Papadour had not been close, but they had rubbed shoulders on that deal with the State… He let his mind wander. The stakes were getting higher. Now, if the rumors were true, then…