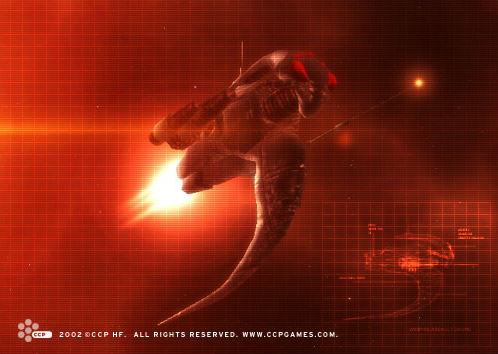 Worlds, moons and asteroids slashed by at a terrifying velocity as the bulky Gallente cargo frigate hurtled across the Murethand system, its anxious pilot pushing every last bit of energy into the drives. Every muscle in Uragan Zelp's body tensed in apprehension. The unwieldy Maulus began to rattle violently as it made the transition from smooth warp-flight to sub-light speed. He realigned his cam-drones to peer behind his ship, panning frantically to-and-fro, wondering just how far behind him his pursuers were.

He had some breathing room at least, thought Uragan. Spending the last two hours playing cat-and-mouse around Murethand's many moons and belts meant the three Caldari raiders waiting for him at the entry point were likely still searching. He pulled up a comm-link to the home base. The face of Director Nestor Makhno appeared on a screen in his mind, painted with annoyance. "You're an hour behind schedule, Zelp, and we've been trying to contact you for twice that. The client is waiting," Nestor half-whispered while tilting his own screen slightly.

"There's been a little problem," spat Uragan, the exasperation in his voice speaking volumes of his emotional state. "I picked up three tails, I think we both know what they're after. I'm making for the Melmaniel gate now, but I need to be met - I can't outrun them forever.” The Director’s expression changed to one of fear and worry, and Uragan spoke up again, almost shouting. “Whose idiot idea was it to ship the Vampire without escort? Damn it, Nestor! You don't pay me well enough to buy the good clones!"

Nestor had just opened his mouth to protest, when the telltale snap of ships emerging from warp-transit caused Uragan's blood to ice over in his veins. He abruptly cut off the comm, and again panned around his ship. There they were... three Condors, fifteen klicks aft of him and closing fast. Even at that distance he could make out the rabbit-skull motif stenciled upon their gunmetal hulls: The Guristas.

By now, Uragan was within activation range of the gate. He clenched his teeth as the fat frigate sank into the gate's periphery, and braced himself against the pod's inner wall, ready for a rough ride. The terrorists would be right behind him, and he knew what they wanted all too well; a blueprint for the Vampire, an assault drone the likes of which the universe could only dream of - and one fully functioning prototype. It cost more money than most fully loaded attack cruisers, and the manufacture process was a closely guarded secret. Some whispered that the drone used a biochemical CPU not unlike a living, artifically nourished brain. Uragan only wished he could unwrap it and set it loose on his attackers.

His stomach heaved upward in his abdominal cavity as the Maulus was belched forth from its wormhole. Uragan raced to find an escape route, scanning the planets and stations for an easy way out. He was about to start up the drive, when a soft impact caused the ship to lurch, and the electric crackle of energy, barely audible as it danced on its hull, made Uragan's heart sink in despair. The Guristas had used a warp-scrambler. He was at their mercy.

The mercurial terrorist's unshaven face swelled into view. He spoke in heavily accented Gallentean. "I think you know the drill, son. Eject the goods in a cargo container immediately or we erase you." Uragan's thoughts raced, and he stammered a reply. "It's not worth that much to me, I'll eject it! Just give me time, it's strapped down in the cargo hold!"

The Caldari thought for a moment. "You have five minutes, little man. After that, we'll peel you open and get the drone ourselves."

Panicking, he switched views to the frigate's cargo hold and brought the auto-loader crane online. Pistons wheezing, it swung to life, groping around like a blind man's arm in the dimly lit bay. After seconds that seemed to stretch into eternity, Uragan spotted it among the various containers: the drone, its bright red casing gleaming against the soft cargo bay lights, was lying unpacked on a grav-trolley. Beside it stood a metal briefcase containing its blueprint. Uragan considered letting the Guristas have it, but his attention drifted to the adjacent drone bay's loading ramp. He smiled inwardly. "Like I said... it's not worth that much to me."

The tiny red drone drifted serenely from the Maulus' bay. Uragan could hear the Guristas' curses and threats. The Maulus rocked briefly as their cannons smashed into its hull, but soon the firing stopped - they had much more to worry about.

The Vampire stirred, its arachnid eyes gleaming to crimson life. It bolted sideways, avoiding a salvo from the lead Condor. Dancing and pirouetting around streams of fire, it responded with its own. In less time than it takes to blink, one of the Condors was torn asunder, another peppered by the blood-red fusillade of the Vampire's pulse guns. Trailed by a crimson contrail, it engaged the last remaining Condor and stabbed at it as the terrorist turned to flee. The warp tunnel was beginning to form around it, and the Vampire's cannons fell silent, unable to maintain a lock. Instead it steered itself into the fleeing Condor, exploding in a hateful red fireball - the terrorist soon joining the tiny red drone in oblivion.

He took stock of the battlefield - debris strewn about his vicinity was a testament to the Vampire's effectiveness. Already, he could see the Director’s ship approaching rapidly in the distance; no doubt he would soon get an ear full. He'd probably lose his courier job, he thought, but there would be more of those. For now, Uragan Zelp was glad to be alive.