Wormholes are space anomalies that are like rifts in space, connecting two or more locations. Like stargates, they allow the travel of ships from one system to another. Unlike stargates, wormholes are not permanent. They connect systems for only a short time, and collapse when a certain amount of time has passed, or too much mass has passed through them. Wormholes can connect two systems quite far apart, and can provide temporary shortcuts to areas that would otherwise take many jumps to get to. Wormholes can also connect to uncharted space, or wormhole space. These systems are uncharted, and do not operate like normal systems do. Take all precautions when exploring wormholes and the space beyond, as what might wait on the other side is a mystery.

Where to find Wormholes

Even though the exact destination of each wormhole remains a mystery before you jump through, there are some visual pointers which can be used to roughly determine what you might encounter on the other side of the wormhole. It is possible to see a part of the nebula the wormhole will lead to before entering through the wormhole itself. Looking at the Show Info description for the wormhole may give an indication of where it will lead. A wormhole leading to 0.0 space can be seen in the picture below: 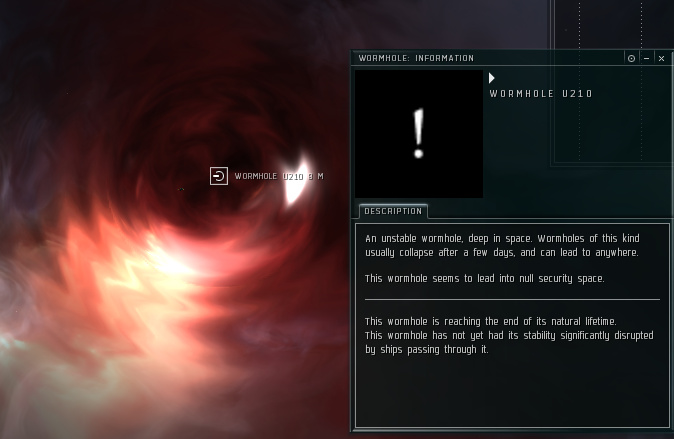 When entering a wormhole located in “known space” (all Empire systems and regular 0.0 space), there are two possibilities for where your ship might be taken.

First, it is possible that the wormhole will simply lead to another area in known space ( what is coloquially known as “k-space”). This can be a system with a different security status than the system you are in, so it pays to be careful when deciding whether to go through a wormhole or not. For example, if you enter a wormhole in a 0.8 system, you might be taken into a system deep in 0.0 space, and the same thing can apply for going through a wormhole in 0.0. Depending on your own security status, you might be entering a system where you are not welcome.

To prevent constant jumping in the face of a hostile fleet, a wormhole will become polarised for 5 minutes., meaning you cannot utilise the wormhole again until the timer runs out. This effect applies independently to each side of the wormhole

If the wormhole takes you to known space, then jumping through will land you in a system that is somewhere on the map. It will have a name, and you can navigate normally once in the new system. If the wormhole hasn’t collapsed behind you, you may go back to where you started by jumping back through. Remember that wormholes decay by both time and the amount of mass that goes through it, so it won’t be there for too long.

If the wormhole takes you to unknown space, or wormhole space, then the primary concern for most pilots will be how to get back to known space. In some instances, the wormhole you came through will still remain, and you can return back to where you came from using the same wormhole. As before, any wormhole may collapse and no longer allow you passage through. Now you have to find a new way out. There will always be a minimum of one wormhole in an uncharted system at a time, but there can also be multiple wormholes in any given system at any given time. These wormholes can connect back to known space, but they might also take you deeper into uncharted wormhole space, often into more dangerous territory. To find new wormholes, you’ll have to use scan probes again, and look for cosmic signatures.

In the event that your ship runs out of probes and the wormhole you came through has collapsed, there is not much that can be done. You could wait around for rescue from others, but this is unlikely. Sometimes pilots will sell exit wormhole locations, but most times they are just as happy to shoot you and loot your wreck. Many pilots choose to abandon their ships and self destruct their capsules to wake up in a new clone in their medical bay. As such, make sure to verify the following before jumping into uncharted space:

Wormholes come with different restrictions. Wormholes not only allow certain amounts of mass through them in their lifetime, but they may also have mass restrictions for each and every transfer. For example, wormholes from known space to Class 1 wormhole space will restrict ships going through to battlecruisers or lower.

Starbases (or POSes) can be deployed in wormhole space, but the logistics involved in refueling them as well as even getting back to them should the wormhole collapse behind you can make it a difficult task. Some explorers may find it lucrative to set up a temporary POS in uncharted space to use as a base of operations and a defensive structure to retreat to. As it is not possible to claim sovereignty in uncharted space, it is not possible to deploy outposts.

There is no automatic update to the “local” channel when in w-space. You may type in local chat, and you will show up there as normal, but if you do not chat in local, then you will not be listed in the pilots in the local system like you would in an Empire or a 0.0 space system. This means that there is no indication of who or how many other pilots are in the same w-space area you are in. With a cloak, no one will ever know you’re there.

A different race of NPCs inhabit w-space. They are called the Sleepers, and are considered the deadliest of all NPCs in New Eden. To find them, you will have to use your scan probes again, and find sites that they inhabit. The higher the class of w-space, the tougher and smarter are the Sleepers. These NPCs are much more difficult to handle than NPCs in Empire space or even 0.0 space. Their loot and salvage, however, can be very lucrative when brought back to known space and sold, or used for building tech-3 ships.

As has been mentioned before, wormhole space is dangerous and very unpredictable. When jumping into a wormhole space, a notice will advise you that there may be changes to the natural physics within this space. For example, you may find that all ships in this w-space have improved shields, or conversely, slower recharge times on shields. There are many possibilities, but remember that they apply to both you and anyone else in the w-space, although not necessarily the Sleepers.

If there is an effect in play in a system, you will see the message, "Local spatial phenomena may cause strange effects on your ship systems." Look at the target system’s space background and compare with the examples below to determine which phenomina is being displayed.

To determine the strength of the effect, you'll need to know what class the system is. This may be determined from the wormhole you came through. These effects do show up in your ship and module descriptions, so you can also use that to detemine what type and strength the effect is.

There comes a time in every wormhole’s life when it will collapse into the ether. Wormholes are inherently unstable, and will eventually collapse. However, wormholes also come in differing varieties of stability and heavy usage of a wormhole can cause it to collapse prematurely. When a show info is done on a wormhole (refer to the picture below), there will be some indications as to how long its remaining lifespan is, as well as whether its stability has been disrupted or not due to the mass of ships traveling through it. 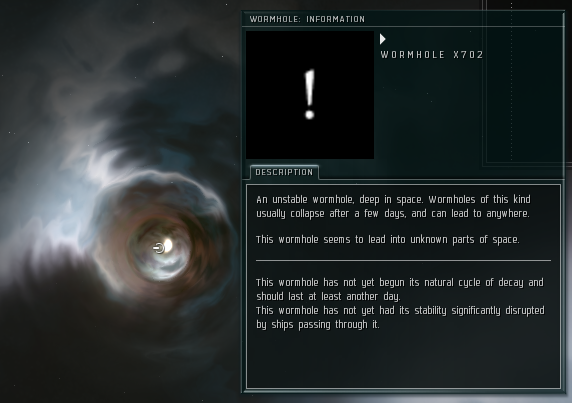 When you find a wormhole, refer to the chart below to aid in identifying what type of wormhole it is. Please note that this data refers to a new wormhole, and that it will decay with time and use, and that mass limitations have a +-10% variation on every new spawn

note: mass/jump = total mass in gigagrams (Gg) that can pass through wormhole at once (limits ship size able to enter various sectors of space; it's possible that CONCORD's anti cap ship technology may be having an effect on wormholes, further study needed), max mass = maximum amount of mass that can pass through before wormhole collapse, and sig str = base signature strength (used for scanning)
note also: class 1 allows only 20,000,000 kg per passage, restricting ships to battlecruiser or smaller; it is possible that something similar to CONCORD anti cap ship tech is influencing wormholes in class 1 space, further study needed.
note also: wormholes marked with a ? or a ** in their "Departs from" field have not been sighted and require confirmation.
further note: constellation statics not included in "Total Counts" field due to lack of data on these wormholes.
* null sec not including jove/ccp space
^also note that the odds of finding a wormhole in null sec can be influenced by the Quantum Flux Generator infrastructure upgrade.
** these wormholes do not bridge from or to high sec, class 1, 2, 3, or 4 space, judging by mass allowances (high sec, class 1, 2, 3, and 4 do not allow more than 1,000,000,000 kg per passage, i.e. no dreadnaught or higher).
sources: Arek'Jaalan Project Compass, Arek'Jaalan Project Snapshot, Arek'Jaalan Project Atlas (which include previous groundwork laid by Elisa Fir).