A martial, strong-willed people, the Brutor hold their tribal heritage close to their hearts. Strong advocates of transforming the Republic into a tribal-based government, they would love nothing more than for all seven of the Minmatar tribes to reunite as one nation. The Brutor are renowned for living regimented, disciplined lives. Despite presenting a tough, no-nonsense exterior, they are deeply introspective and "in the moment", aware of even the smallest detail. Immersed in ancient martial traditions that begin at childhood, they are physically robust individuals and intimidating to face in the flesh.

The Brutor are a swarthy people originating from the island-ridden southern hemisphere of Matar. They are a bit larger and burlier than the other tribes, and as they favor physical prowess over anything else they can be frightening to face in the flesh.

Male Brutor present a stoic front, but are patient, vigilant, and determined. They are keenly aware of their surroundings—physically and socially—at all times. Despite their gruff demeanor, they are passionate individuals, and are capable of pursuing any task with relentless focus and determination. 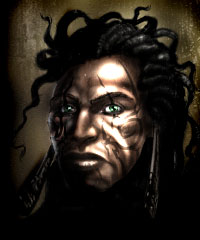 Brutor females are in many ways the opposite of male Brutor. They are dominant, persistent, and egocentric. When they set their mind on something, they usually succeed. Between their wits, grace, and beauty, they are masters of manipulation.

Many Brutors have a modest background, and are often found performing backbreaking labor in the farms, mines and factories of the Republic — and before that, toiling under the yoke of the Amarr Empire. They still take great pride in their jobs, excelling as craftsmen and builders.

Millions of slaves within the Amarr Empire dream of escape, especially for their children. Every year thousands of newborns from enslaved parents are smuggled out of the Empire into the safety of Minmatar space, where they are raised by foster parents.

Relegated to the most dangerous and inhumane tasks of the era, the Brutor were treated harshly by the Amarr Empire during the occupation. But this only strengthened the bond with their cultural heritage—the only thing the Amarr could never take away from them.

The Brutor tribe and the Starkmanir tribe were once one and the same, living in the vast Eyniletti-plains. Some thousands of years ago one of the sub-clans of this tribe traversed the Mioar-strait and started settling the islands in the Mioar archipelago, moving ever more southwards. In the end, this sub-clan lost contact with their head tribe, and the Brutor came into existence.

The Amarr enslaved the Brutor in droves, as due to their physical strength they were ideal for manual labor. A considerable portion of the tribe is still enslaved within the Amarr Empire.

Traditionally the most militant of the tribes, the Brutor are convinced that this is their time. They've always wanted to hit back at the Amarr Empire, and now their wish has been granted. Already there's a certain amount of hero-worship for Maleatu Shakor, whose star has well and truly risen, and most Brutor buy wholeheartedly into his rhetoric. Some older and wiser heads wonder quietly about the military realities of the situation, but most are too caught up in the prevailing sentiment to care.