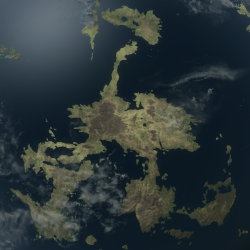 Numayriyah is a continent on Thebeka III in the Domain region of the Amarr Empire. It is ruled by the Numayr Family, who are vassals to the lord of Thebeka and the Ardishapur Family.

Numayriyah is located on the equator of Thebeka III, a 310 K average temperature planet. It is typically very warm, though it has a large seasonal variance in its climate due to its eccentric orbit, with long wet and dry seasons. The Numayriyan continent is a mix of equatorial, tropical, and subtropical zonobiomes, and is comprised of savannas, shrublands, deserts, tropical forests, and mountains, with large mountain ranges and grasslands in the largest, central part of the continent, and desert dunes on the southeast arm.

Most city buildings are large and circular, many topped with domes. Generally, each dome is subdivided into multiple levels and internal buildings, so the domes can get rather large. All of the buildings are connected, share public resources, and are kept cool inside. A network of bioturbs provide usual transit between buildings, but it is possible to walk or secure alternate routes. In most cities, at least one district (between one or several domes) is devoted to slaves, with increased security regulating transport between slave buildings and free buildings. Religious iconography is common on most buildings, though the amount and upkeep varies depending on the wealth of the local neighborhood. Most buildings include religious rooms to accommodate daily prayers and worship. Many local businesses, in varying fields, make use of slave labor, leased from the ruling Numayr Family or their vassals.

Outside of the cities are farmlands. Water-providing and solar-blocking infrastructure enables growth cycles even during the long dry seasons. Slaves work these fields using vehicles and machinery. There are also vast fields of solar panels and wind-harvesters. These do not provide the complete sum of the cities' power supplies, but work to supplement the main city reactors and generate energy for smaller settlements.

Desalination plants and rain collectors provide much of the local potable water, and recycling capabilities are high. Many buildings also have a tap to the water table (slave buildings typically lack this by default, but many slaves know how to build them).

Numayriyan local culture is, like most Ardishapur territories, devout and conservative. It is generally distrusting of outsiders and the importing of foreign goods is restricted. Numayriyans are largely peaceful and the population favors internal spiritual development over wars of conquest. The idea of True Amarrian superiority is the norm in Numayriyah. While Numayriyans do not necessarily believe that all non-True-Amarr must forever remain slaves, and most believe that all races have the chance to prove themselves true servants of God, the common interpretation of the faith is that True Amarr are spiritually, culturally, and biologically superior to others. Despite the peaceful and introspective nature of Numayriyah, the social divisions have allowed an undercurrent of anger to develop among the lesser races and classes. Free people of non-True-Amarr birth face considerably more difficulties in building good lives, while the poor of True Amarr birth typically blame those of "lower" heritage for their current state. Violence, discrimination, and abuse occasionally arises between poor True Amarr and members of "lesser" races.

Numayriyans highly value honesty and integrity, and the region has what might be considered pre-Vak'Atiothan sensibilities. They generally disfavor the concessions made by modern Amarr, and have little respect for the actions of many recent emperors, including Heideran. Numayriyah, like many Ardishapur territories, favors an Empire that is isolated from the interstellar community.

The most populous ethnic groups in Numayriyah are True Amarr (with a high number descended from Udorians), Ealur, Brutor, Sebiestor, and Vherokior. There are very few Ni-Kunni on Numayriyah. As a core world, settled already relatively shortly after Amarr ventured into space, and due to the relatively short period in which Ni-kunni were enslaved on a large scale, relatively few made it to Thebeka.

The ruling family of Numayriyah are the Numayr Family. Lord Khalil Heshmat Numayr is the title holder. He is in his mid to late 100s. Khalil is wise and dignified, and shows respect towards honorable opponents. He takes politics and social class very seriously. He refuses to engage with commoners in any form, and finds the tendency for capsuleer Holders to interact freely on public venues like the IGS to be uncouth. Khalil is generally only seen by those outside of the family for formal state functions or in high society affairs exclusive to peers and superiors. He is married to Lady Khorisi of House Mozafari. They have four children and dozens of grandchildren and great grandchildren between them. The family colors are yellow on blue, and their charge is a chalice with two feathers.

The Numayr Family has some small amount of Udorian heritage. The family does not deny this fact if it is brought up, but it also does not call attention to it in the manner that houses like the Tash-Murkons do. The Numayr Family position is that they are True Amarr, period.

The Numayr Family is a vassal of House Ardishapur. They are opposed to House Tash-Murkon, though this is over their poor devotion to the Imperial Rite rather than their racial background. The Numayrs did not approve of Jamyl's ascent to empress and are against the reintegration of the Khanid Kingdom, though the family is politically adept and generally avoids stating such things openly. 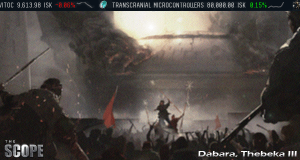 Dabara, a city on Numayriyah, suffered a major slave rebellion between December of YC120 and January YC121.

Numayriyan slaves are brought up in the faith and given education (within reason for their occupation), and are generally high generation. Most slaves are loyal to the Amarr faith and nation. TCMCs are banned in Numayriyah, and vitoxin is reserved only for the most troublesome cases, where traditional slave control methods fail. The Numayr Family rely on carrot and stick methods. Positive behavior is reinforced (with greater privileges, access to better jobs or positions, access to spending money and personal possessions, greater freedom of movement, larger housing, etc), while negative behavior is punished (reduction in privileges and dignities, corporal punishment, penitent's boxes (essentially a hot box), glaive collars, vitoxin or family separation in extreme cases). Punishments are typically public, to discourage others. Most high generation slave families have culturally internalized this, and indoctrination starts at home. Families prefer to punish their children first, rather than leaving it to an overseer or Slaver.

Most overseers (and some police) are slaves, too. While many are good, decent people, the insecurities inherent in being born and raised in slavery means some overseers let the power go to their heads and take advantage of their positions to abuse the lesser slaves beneath them. While in theory the Numayr Family would disapprove of this behavior and punish those engaging in it, and indeed they strongly encourage slaves to report inappropriate behavior they witness among their neighbors, the nature of slavery means many crimes go unreported because of likelihood of being ignored (or worse, punished - a likely outcome to reporting on a superior). Free Slavers do exist at the upper levels, but they generally manage larger groups of slaves and prepare programs they delegate to others rather than micromanaging individual slave development.

The Salvation Church of Blessed Servitude provides most of the spiritual and educational development for slaves in Numayriyah.

Slaves are fitted with subdermal tracking chips at birth. Having a child (and other major life developments, like marriage, major purchases, and so on) requires the permission of a presiding overseer or slaver. All slave births must be documented and these births must be performed by medical professionals (both for health reasons and to ensure every new slave is accounted for and chipped). Concealing births is a high crime that if discovered will result in the separation of the child from their parents (among other consequences). Technically-savvy slaves, rebels, and freedom fighters generally know means of disabling the tracking chips (though disabling a chip sets off a silent alarm that directs security forces to its last known location), but they are effective at keeping the average slave from escaping. Slaves typically start work at around 7 years old. Slaves go through regular aptitude tests to determine their skills, allowing Slavers to place them where they will be most useful.

Due to the general high quality of its slaves, slaves are a major export for the Numayr Family. Its reputation in this market has suffered considerably, however, following large slave rebellions that took place on Numayriyah in late YC120 and early YC121.[1][2][3][4]