The most mysterious and elusive of all the peoples of New Eden, the Jove number only a fraction of any of their neighbors, but their technological superiority makes them powerful beyond all proportion. 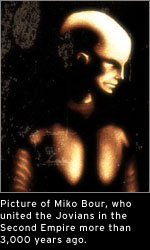 Although definitely human, the Jove often seem to the other races as though they are not, the reason being that they embraced genetic engineering as the way to solve any and all the problems which plague the human race. Over the thousands of years since, the Jove have experimented with every kind of genetic modification their technology allowed. As their powers grew, they began to believe they were capable of anything, and this led them into increasingly more bizarre mutations of their bodies and minds, a policy rigorously backed up by strict governmental control.

But one fateful moment in their history made them lose this control for a few generations, and the results were catastrophic. By this time the Jove had begun interfering with their basic instincts, curbing their aggression and sexual instincts and cultivating strange new ones instead. Since the Shrouded Days, as the Jove call their momentary social eclipse, they have been trying to put the pieces together again, but their DNA-structure has in many ways been damaged beyond repair. The consequence is the dreaded Jovian Disease. Genetic in nature, it is not infectious to other races, but among Jove it causes a depression so deep and serious that the victim loses the will to live, and death results within a few days or weeks. 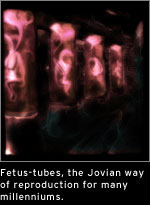 Despite this, the Jove escaped the chaos that followed the closure of the EVE Gate remarkably well. Within the space of only a few centuries they had recovered, and were once again running a hi-tech society. They settled in a number of systems and founded an empire lasting for nine millennia, but even if the Jove are by far the most technologically advanced of the races of New Eden, they have still not recovered the splendor of their first empire. The disease within them keeps them in a reproductive straightjacket, preventing them from increasing their numbers sufficiently for their current empire to flourish.

Jovians have a very strange appearance. They are at most about four feet tall, and their skin is a grayish yellow, their veins clearly visible. They have also lost all hair on their bodies. The Jovian language is a very strange tongue. speech consists entirely of vowels and fluctuates rapidly in frequency.

The Jove crave knowledge, any knowledge at all. Their superior technology has enabled them to infiltrate the other races with bugging devices and sensors, giving them unrivaled access to information, which they use to maintain their strong position among the races. The Jove sell a lot of their advanced technology equipment to the other races and it is this, more than anything else, which keeps the others at bay. Jove technology is so advanced that foreigners can't even comprehend it. Of the limited knowledge the empires have, they know that it is literally thousands of years ahead of them, although the most amazing marvels of Jove are extremely closely guarded secrets.

Jove society is mysterious and difficult to comprehend. For this and other reasons it remains very much closed to the other races, and few foreigners reside within the Jovian Empire.