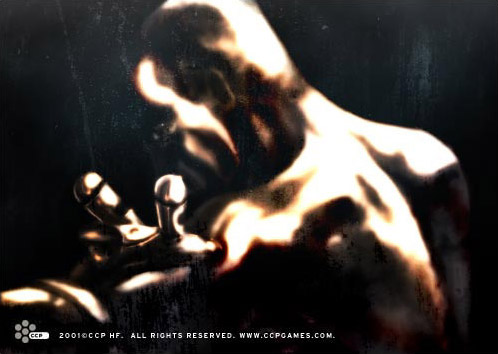 A fair proportion of the Amarr Empire still consists today of slaves, mainly of Minmatar origin. Through the ages the Amarrians have employed various methods of keeping the slaves in line. Many of them are deemed, by the standards of the Gallenteans and others, to be highly immoral and cruel. One of the more recent and controversial methods is called after the antidote drug involved - Vitoc.

With the Vitoc method, slaves are injected with a toxic chemical substance that is fatal unless the recipient receives a constant supply of an antidote. The method first appeared a few centuries ago when the Amarrians started manning some of their space ships with slaves. As space crew the slaves had to be cajoled into doing complex, often independent work, making older methods of slave control undesirable. Although the more conventional ways of subduing slaves with force (actual or threat of) are still widely used in other forced labor areas, the Vitoc method has proven itself admirably for the fleet.

There are two major downsides to the Vitoc method: the method works only as long as the toxic substances remain in the body, and as long as there is no alternative way for a slave to receive the antidote. If either applies, a slave can obviously not be forced to do anything.

For the past decades a fierce R&D battle has taken place between the Amarr Empire on one hand and the Minmatar Republic and the Gallente Federation on the other. The Amarrians are constantly upgrading and altering the toxic chemicals they use on the slaves, while the others are struggling to research and manufacture a permanent remedy. For many years this battle waxed and waned, with the Amarrians releasing a new version every few years, but the others managing to discover a remedy shortly thereafter.

But then, a little more than a decade ago, the Amarrians introduced a new and revolutionary toxic drug, which resembles a virus in many ways, and no cure has yet been found for it. This is mainly due to the erratic nature of the drug, which constantly changes its appearance and behavior on a regular basis. These changes seem to be either controlled, or at least predicted by the Amarrians, as they always seem to have the right antidote for their own use out in time before the toxin changes again. Thus, the Minmatars and the Gallenteans are constantly chasing a ghost - a toxic virus that shifts into something completely different just when they think they’ve finally nailed it down.

There are more novel features about this new toxic chemical, letting many believe that either an Amarrian scientist genius suddenly appeared or the Amarrians got some crucial help from the outside; the Caldari and even the Jovians have been mentioned in this regard. One of the additional features in the new virus is that the resulting death is much more horrifying now; those that fail to get antidote will suffer excruciating pain that can last for days before death finally comes. With the older versions, death by lack of antidote was never so horrible, sometimes even peaceful. This led to mass-suicides at times when slave crews refused to take the antidote; preferring death over humiliating slavery. Now, although still an option, few people are brave enough to dare it. Another new feature is the very pleasurable side-effect created by the antidote: for the first few hours after injection the receiver gets a very powerful euphoric sensation - as long as he is affected by the toxic virus. Both these extra features have helped bind the slaves to the drug, and thus to their slave-masters.

The transformation of the struggle this past decade has been like a god’s gift for the pirate and smuggling industry. Not only is it much easier for this industry to quickly and repeatedly adapt to the ever-changing products (the antidote in this case) than for conventional industries, but the fact that no permanent cure for the new drug had been found means that the ever-increasing number of newly freed Minmatar slaves still need the antidote to survive - hence creating a thriving business outside the Amarr Empire for the antidote for the first time. A lot of people have made fortune beyond their dreams by dealing in the Vitoc antidote, but just as many have been ruined when all their expensive antidote stock became obsolete due to a sudden change in the toxic virus.